The Foundation provides several opportunities for people living with ALS and their families to come together, offering support to each other and receiving the professional advice and guidance of the Foundation’s ALS Support Services Coordinators.

You Are Not Alone

Many people find a peer support group to be a safe space to help navigate and manage the difficulties in their lives. Faced with similar challenges, participants of support groups understand, on a deeper level, what other members are feeling and experiencing without the need for explanation. A support group can help its members cope better and feel less isolated as they are surrounded by others who are undergoing a similar situation. Group members typically share their personal experiences and offer one another emotional comfort and moral support. Support group leaders are present to offer guidance and disease education as well as encouraging conversations to continue in a direction that is of interest and benefit to the entire group.

The Foundation has formed its support groups to offer people and families living with ALS a support system outside their immediate circle, to make connections with others and offer a place for members to gain additional emotional support and practical advice for their situation.

The safety of our Les Turner ALS family, especially those living with ALS, is our top priority. Due to the current Coronavirus (COVID-19) outbreak, we are currently offering online support groups. We will provide an update when in-person Support Groups are able to resume.

To learn more about ALS and COVID-19, visit our website here.

All support group meetings, both in-person and virtual, are open to people living with ALS, family members, caregivers and friends.
For more information about any support groups or meetings, or to be placed on our support group mailing list and/or to RSVP to a group, please contact us at supportgroup@lesturnerals.org. We look forward to hearing from you! 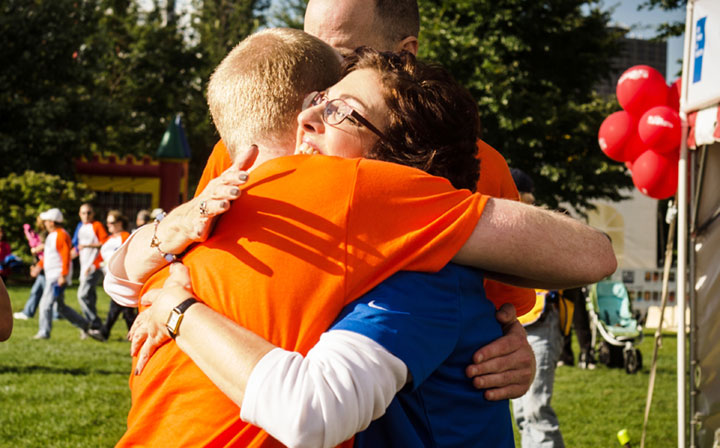 Have a specific question you need answered?

Cara F. Gallagher MA, LCPC received her Master of Arts in Counseling and Psychology in 1997.  She has over 25 years of experience working in the nonprofit sector managing In-home and Residential Support programs, as well as providing case management to individuals with Intellectual Disabilities. Cara joined the Foundation as the National ALS Registry Associate and member of our Support Services Team in 2016. Cara also meets with people living with ALS every week at the Lois Insolia ALS Clinic at the Les Turner ALS Center at Northwestern Medicine to provide support and resources.

Anne Lidsky, PhD, has served as a support group leader since 1983. She received her B.A. from the University of Illinois, her M.A. from Northeastern Illinois State University and her PhD in Counseling Psychology from Northwestern University. Anne is a licensed clinical psychologist.

Ileane Mindel, RN, was the Les Turner ALS Foundation's Manager of Community Education for 25 years before retiring in 2020. Ileane graduated from Mount Sinai Hospital School of Nursing of the City University of New York and previously worked at Hospice of the North Shore where she served as Coordinator of Patient Care and Payer Development.

Karen Raley Steffens, RN, CHPN, CCM, received her Associate Degree in Nursing from William Rainey Harper College in 1994. She is also a Certified Hospice and Palliative Nurse and Certified Case Manager. Before joining the Les Turner ALS Foundation, Karen worked as a Hospice Care Manager with JourneyCare where she worked with her first ALS Patient. Karen joined the Foundation as an ALS Support Services Coordinator in 2016.

Julie Stowell, RN, CHPN, received her AD in Nursing from the College of DuPage in 1997. After working in critical care for 2 years, Julie spent the next 15 years in hospice care where she provided end-of-life care to all populations with terminal illnesses. However, she focused on the identification and treatment of the unique symptoms and equipment used to enhance the comfort and quality of life for ALS patients. As a hospice patient case manager, the management of physical and mental symptoms of verbal and non-verbal patients post surgery, post-chemotherapy and post radiation were commonly addressed. Julie joined the Foundation as an ALS Support Services Coordinator in March 2014.

Chicagoland Area – Meets the Third Tuesday of each month from 1pm – 2:30pm

An 8-week bereavement group for spouses or partners of people who have died from ALS within the past six months.  This group provides support, validation, and education in a supportive setting to those who are grieving the loss of their loved one.

Date: Dates to be determined, by invitation only

A monthly bereavement group for those who have lost their spouse or partner to ALS and who have attended the 8-week Moving Forward After Loss bereavement group.  This group provides continued support and allows members to engage with others who are experiencing similar grief.  Group participation is available for 24 months following the death of the spouse or partner.

Date: Ongoing, by invitation only

Ensuring Our Support Groups for Years to Come

Learn more about the Ileane Mindel Support Group Fund and how to make a donation, here.

2018 ALS News You Can Use Educational Meeting
Legal Care for Living with ALS
(Helen Mesoloras, JD, Elder and Disability Attorney and Partner with Dutton & Casey, Attorneys at Law)