The Foundation represents the European Network to Cure ALS (ENCALS) 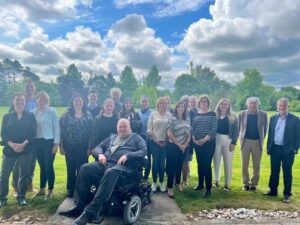 In June, our CEO, Andrea Pauls Backman, attended the European Network to Cure ALS (ENCALS) conference in Edinburgh, Scotland, along with 650 ALS/MND researchers, patients, and advocates. During the conference, she heard firsthand the discoveries being made in ALS laboratories that could be used to further innovative projects being done by researchers in Chicago, Beijing, or Melbourne.

While in Edinburgh, Andrea also participated in board meetings as a director of the International Alliance of ALS/MND Associations. This one-of-a-kind alliance connects over 50 ALS organizations around the world from over 35 countries, providing educational resources, aligning the needs of people living with ALS around the globe, and sharing research findings in partnership with the International ALS/MND Symposium, the largest ALS research gathering in the world. 2022 marks the 30th year of the Alliance and the Les Turner ALS Foundation is proud to be a founding member.

Webinar: Complementary and Alternative Therapies for People Living with ALS and Caregivers

Integrative holistic therapies can play a significant role in helping people feel better, especially when they are dealing with neurologic diseases like ALS.

Join us on Thursday, July 14 from 12:00 p.m. – 1:00 p.m. (CDT) for the next webinar in our ALS Learning Series, “Complementary and Alternative Therapies for People Living with ALS and Caregivers.” The webinar will discuss how people living with ALS and their caregivers can benefit from proper nutritional diets, exercise, and mind-body therapies. 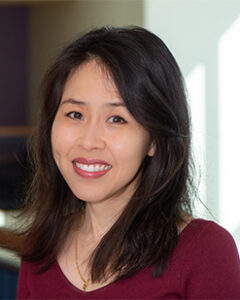 Presenter Jinny Tavee, MD, is the chief of neurology at the Department of Medicine at National Jewish Health. Dr. Tavee teaches meditation to medical students, patients, and physicians from all over the world. She is actively involved in researching the effects of meditation on chronic neurologic diseases and has recently completed a clinical trial evaluating the use of yoga breathing for people living with ALS.

The Les Turner ALS Foundation is proud to offer this webinar at no cost to the ALS community. Thank you to Mitsubishi Tanabe Pharma America and Cytokinetics for sponsoring this webinar.

Welcome to the Board of Directors

We’re happy to welcome Erin Reardon Cohn as the newly elected chair of the Foundation’s Board of Directors. She’s joined by two new additions to the board – Rich Ashlin and Sean Fallon. 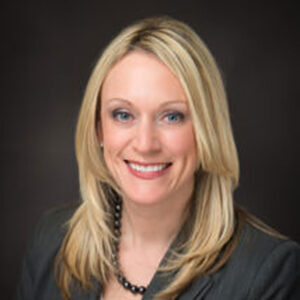 Erin served as the board’s treasurer since joining in 2019, and she is thrilled about her new role as chair.

“I want to continue the mission of the founders.” says Erin. “The founders instilled a culture that believes in community, compassion, and action.” She adds, “Right now, ALS awareness is at a high, thanks to the ALS community, and our partners. We have awareness in Congress. We have an incredible clinic, research programs, and support services. As chair, I will do whatever I can do to bring the Foundation to the next level.”

Erin takes over for Ken Hoffman, who served as chair since 2008. We’re grateful that Ken will remain on the board as treasurer.

Rich is the vice president of hub operations at O’Hare International Airport for American Airlines. After relocating to the Chicagoland area in 2021, he wanted to support his brother-in-law who lives with ALS. Subsequently, he found out about the Foundation through our ALS Walk for Life.

“Since American Airlines supports multiple charities, I asked for my company to support the Foundation and they immediately said, yes!” reports Rich. “As a board member, I am hoping to leverage my company’s support for events, such as the Hope Through Caring Gala and the ALS Walk for Life. I also have a personal interest to become involved to assist in our search for a cure while also gaining as much knowledge as I can about ALS.”

“When my mom was diagnosed with ALS, I knew what the prognosis was, and I wanted to find a way to do more to try and help my mom and others living with ALS,” says Sean. “I met members of YPG at the Strike Out ALS 5k in 2016. As my mom’s ALS progressed, I came to really appreciate the support and efforts of the group as well as what the Foundation was doing to help my mom. After seeing firsthand what this disease does, and meeting so many fantastic people in the ALS community, I knew I wanted to do more.

“I am joining the board to continue to push for more support, awareness, treatment, and an eventual cure. I am looking forward to working with the other board members and staff to achieve these goals and learn from them in an effort to increase what I am able to do. I also will continue working with and promoting YPG, as it has been both a fundraising tool and a support group to many.”

Join Erin, Rich, Sean, and their fellow volunteers at events this summer and fall to create more ALS awareness and to continue the fight towards ALS cures!

Richard A. Perritt had a remarkable career. He performed eye surgeries on two popes and several international dignitaries, and he was responsible for several breakthroughs as an ophthalmologist. For 35 years, Ron Tyrpin served as his investment adviser.

When Dr. Perritt died in 1991, Ron and his wife, Diane, began to serve as trustees of the newly established Richard A. Perritt Charitable Foundation, which funds numerous projects close to the heart of Dr. Perritt – pioneering ophthalmology research, education, children’s health care, and senior programs. 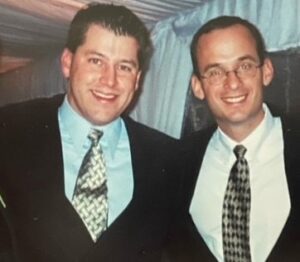 John Tyrpin, Ron and Diane’s son, and his family now run the Richard A. Perritt Charitable Foundation. Following the ALS diagnosis of John’s close friend and fraternity brother Cory in 2016, he witnessed firsthand the Les Turner ALS Foundation’s work and commitment to fighting ALS, and our support of those living with ALS and their families, including Cory and his family:

“I had the chance to see the Les Turner ALS Foundation’s actions directly through their support of my good friend Cory. Their actions were a huge benefit to him and his family during his fight against ALS. I thank them for that and will be an ally for their cause.”

We are grateful to the Richard A. Perritt Charitable Foundation for providing funding towards our support services to provide education, resources, and care to people living with ALS and their families.