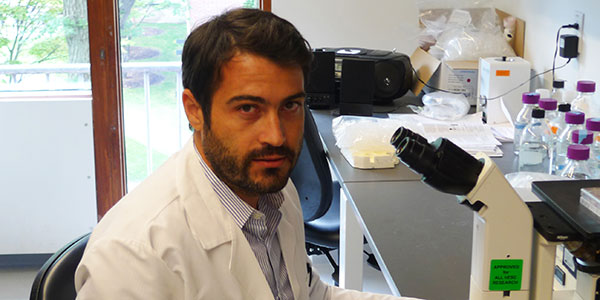 While the majority of ALS is sporadic, a relatively small, but highly informative, percentage of patients are diagnosed with mutations in various genes which include: SOD1, TDP43 and C9orf72. The goal of the Kiskinis lab is to characterize how these mutations impact the function of human motor neurons and whether they do so in similar ways.

By identifying common cellular pathways that are abnormal in different genetic subtypes of ALS, we can target these abnormalities for broadly applicable therapeutic intervention.

With this goal in mind, the lab continues to generate patient-specific stem cell lines as well as stem cell lines in which the disease-causing variants have been corrected. The lab hopes to create one pair of stem cell lines for every genetic subtype of ALS that exists.

As the lab works toward this goal, they continue to grow and have recently welcomes two additional members: Dr. Alberto Ortega, a postdoctoral fellow and experiences neuroscientists and Chris Taylor, a recent graduate who has studied ALS using C. elegans, a roundworm commonly used by scientists around the world for research.