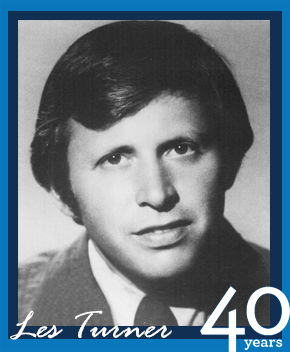 Faces of ALS Through Forty Years of History

This year, we celebrate forty years of providing hope and help to people with ALS. Throughout the year, our “Faces of ALS” will tell the stories of people who have been affected by ALS and how the Foundation has helped support them on their journey. We are honored to have earned the trust of each and every one.

The accomplishments achieved by the Les Turner ALS Foundation in our forty years have been countless. Each success paved the way for another, building a Foundation that today provides support to the vast majority of people living with ALS in the Chicagoland area and serves as a model for other ALS organizations worldwide.

It all started with one man – Les Turner. At the age of 36, Les was an accomplished Chicago area businessman, married and raising three young sons. In 1976, he was hit with a fatal blow when he was diagnosed with ALS, a disease he and his network of close friends and family knew little about. Looking around, this tight-knit group found few resources or information on what was known as Lou Gehrig’s disease. Les and his family were virtually alone in their fight.

But Les didn’t give up. He, along with his wife, Ina, her sister and her husband, Bonny and Harvey Gaffen, and their friends and family, decided to start a foundation that would raise funds to provide vital research and resources to ALS patients and families. No one would have to go through this disease feeling alone and uninformed.

In 1977, the Les Turner ALS Foundation was officially launched.

Only a year later, Les passed away from the disease. But his legacy would go on to support thousands of people living with ALS and their families, growing stronger each year.

Forty years later, we still fight Les’ battle and continue his vision of ensuring all ALS patients and families have the resources, support and hope for a cure that were unavailable to him. We do this while continuing to fund world-class ALS research and clinical care.

In honor of our 40th anniversary, Les’ family has written a letter of thanks to the supporters who enabled the Foundation to grow into what it is today, the oldest comprehensive ALS group in the country.

This year, we ask you to join us as we celebrate and honor the people supported by Les’ vision through the years and as we continue our work to ensure that, one day, we will live in a world free of ALS.