A Lasting Legacy of Love, Faith, and Adventure

Recently, Terri experienced her first Mother’s Day without her mom, Eloise. In this month’s “Faces of ALS,” we learn more about Eloise’s journey with ALS and how Terri continues to honor her mother. 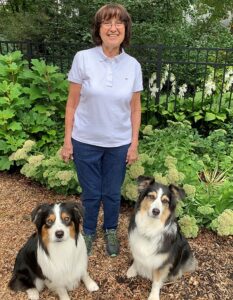 “My mom was always energetic and healthy,” says Terri. “She was highly active in her Catholic faith and her parish. She also regularly competed in dog agility trials with her two Australian Shepherds, Lily and Ripley. She started experiencing weakness in her arms and hands in the late summer of 2018. After visiting countless doctors to figure out what was going on, we finally got her into a neurologist who suspected ALS. She was then diagnosed with ALS in January 2019.”

As an only child, Terri wanted her mother to live closer so that she could care for her. “At that time my mom was living alone in St. Louis, since my father had passed away 10 years before,” she explains. “Mom was hesitant to move at first as she was very independent and had a whole life of her own back in St. Louis. However, as her symptoms continued to progress over time, she realized it was best to move.”

Once Eloise settled in the Chicago area, the next step was to find a physician to treat her ALS. Through extensive research, the family made an appointment with the Lois Insolia ALS Clinic at the Les Turner ALS Center at Northwestern Medicine, where Dr. John M. Coleman III became Eloise’s pulmonologist.

“He was so knowledgeable and proactive with her care, so we knew instantly that she was in the absolute best hands,” says Terri.

Despite her diagnosis, Eloise was committed to living to the fullest and spending time with her children and grandchildren. 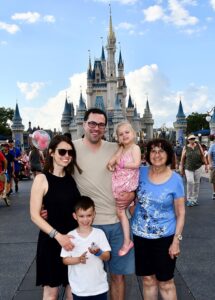 “My mom was known as ‘Grandma Weezie’ to her two grandkids,” says Terri. “She absolutely loved being a grandma and was always up for any adventure! In May 2019, we took her and our two kids, who were 3 and 6 at that time, to Disney World. My mom had always wanted to do this with her grandkids and at the time she was still able to go on the rides with them.”

Shortly after that trip, Eloise underwent a procedure for a feeding tube. Feeling more energetic due to better hydration and nutrition, she was up for more adventures. In October 2019, Eloise, Terri, and her husband set out on a European getaway which included Paris, Rome & Florence.

When the family returned from Europe, reality set in as the disease continued to progress. The family reached out to the Les Turner ALS Foundation for assistance in obtaining mobility equipment and a communication device. Julie Stowell, RN, one of the Foundation’s ALS Support Service Coordinators, continued to provide much-needed support and assistance to the family.

“Julie was a constant source of support and knowledge,” says Terri. “As my mom’s disease really started progressing, we would have been lost without Julie. She was knowledgeable about the best equipment, services, and ways to keep her comfortable. Julie was always able to communicate the next steps with my mom in the most compassionate and understanding ways. Even when the conversations about the next steps were beyond difficult, she always had a caring and calming presence with my mom, as well as with me. Julie is truly one of the best!”

Eloise passed away in November 2021, but the family continues to receive support from the Foundation. Terri says, “The Foundation was there for us at every turn of my mom’s disease. Even after my mom’s passing, they continue to offer us guidance and grief support. I will be forever grateful and thankful to the Les Turner team!”

Terri and her family remember Eloise as a kind, patient, and loving soul but also as the strong and brave ALS fighter that she was. Her family also celebrates her memory in many ways, such as Eloise’s love of dogs.

“A family friend of ours recently shared information on a Junior Dog Agility class with me,” says Terri. “It’s something my mom used to talk about regularly with my 9-year-old, dog loving son, ever since he was a toddler. My son was excited about the opportunity, so we signed him up for a couple of summer classes. I know they’ll love it, and I know my mom would be over the moon! It’s such a fun way to continue to honor her!”

Help us honor families like Eloise’s during ALS Awareness Month and beyond by donating.