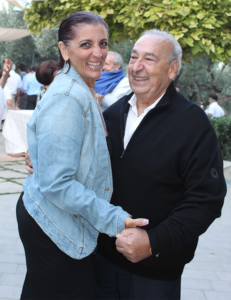 For Renato, despite having been a successful business owner and a politician, his family came first – even after his ALS diagnosis. Caring for his family and specifically his wife was his top priority.

As many of us know, being a caregiver is not easy, especially when having to deal with your own health issues.

“Both of my parents had health concerns. However, each considered the other their ‘primary caregiver,’” explains his daughter Lisa. “Their commitment to caring for each other was endless.”

When Renato was diagnosed with ALS in 2014, he struggled with the diagnosis and initially didn’t want to share the news with his family. In the initial stages, he sought alternative diagnoses while doing everything suggested to him in the event it was ALS, including physical therapy, exercise, and following a proper diet.

As his ALS progressed and it affected his ability to walk, Lisa’s dad refused to use the assistance of a walker or cane.

“He loathed the idea of appearing weak or disabled,” Lisa says. “When his falls started to become increasingly dangerous, like brain bleed, stitches, and even hospitalization, I bought him a collapsing wheelchair. He hated it. I explained to him that it was a gift to me because it was becoming increasingly risky to take him out to restaurants, walk him around the yard or sometimes even move about the house. Gradually, he began to use the wheelchair and by the summer of 2019 he was entirely dependent on it.”

Lisa’s family was dealt with another blow when her mother passed away in 2019, leaving her dad without a primary caregiver. Lisa, her siblings, and their children stepped up to serve as her dad’s “comfort givers,” and the grandchildren provided extra motivation for Renato. 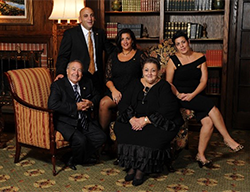 “My siblings and I would take turns being at his house to watch TV, reminisce over old family photos or movies, or make dinner,” she says. “We each tried to make his favorite foods like baked Calabrian eggplant or fried zucchini flowers, tell his favorite jokes and learn our family history to pass on to future generations. Even in a wheelchair my dad made it to graduations, sacraments, birthday parties, and events. He fought tooth and nail until his last day to be present for his grandchildren.”

Lisa and her family learned through their dad’s ALS journey that being a caregiver or comfort giver is not easy, and people need to take advantage of the resources out there and not give up. She is grateful for the support that they received from the Les Turner ALS Foundation.

“There are resources available for both the patient and family, so use them. Don’t be shy; ask questions,” she says. “Don’t stress the small stuff and know that there is help for the big stuff. You are not the first and unfortunately won’t be the last who is diagnosed with ALS. Most of all, remember to savor the moment.”

“We didn’t know when the last time would be that my dad would do things like brushing his own teeth, dancing, or driving,” she adds. “We did not know the last time until it had already passed, and each last time had its own mourning period. My dad rarely complained about his condition, but he would on occasion lament, ‘I just miss my hands,’ as he could not scratch his head, blow his own nose or write his name on a greeting card.”

Despite not being able to do the things that he once did, Support Services Coordinator Julie Stowell remembers Renato’s positivity throughout his ALS journey: “He was never bitter or angry. He was a very kind, gentle, humble, and generous man — always thankful.”

In caring for their father, Lisa and her family made sure that Renato was still involved in all precious moments of their lives and continued to make memories with his family:

“Making the best of the ALS journey sounds so cliché but it was what we did,” she says. “We made sure that dad did the most he could do at the time he could do it. When he was no longer able to get on our family boat at the lake house, the grandsons stepped up and lifted him. When dad didn’t feel comfortable coming to our houses for parties or holidays, we started hosting them at his house. We never left dad behind but accommodated him so that he could be a part of whatever was happening and more importantly could continue to build memories with all of us.”