Super Bowl Champion Steve ‘Mongo’ McMichael was diagnosed with ALS in January 2021. He points out, “It’s called Lou Gehrig’s Disease. I didn’t know that it was a metaphor too. ALS is going to run the bases on you.” Adding with his sense of humor, which remains intact, “ALS will sneak up on you like a cheap shot Green Bay Packer.”

Steve used to squat 720 pounds. Besides having been a member of the celebrated 1985 Chicago Bears, he was also a professional wrestler. He had a larger-than-life physical presence as well as a personality that matched. These days, it’s a challenge for Steve to hold out his arms and he now uses a wheelchair. Steve’s personality hasn’t changed, but his motor skills have declined due to ALS.

Despite that, Steve says, “I’d do it all over again. Even if it means that you’re going to get ALS at 63 years old. The journey is the reward – not the destination.” 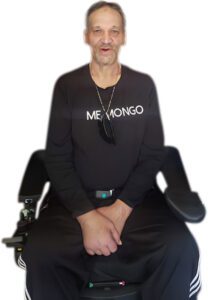 Steve is especially grateful for his wife, Misty. “I always knew from the first time that I met her that she would be a good mother – a nurturer. And having lost my ability to do things due to ALS, this just falls along the same lines.” says Steve.

Since his diagnosis, Steve has reflected on his life and embraced both the good and the bad. “I see the compassion in people – that’s when God is smiling.” Steve is also content with how he has lived. “Every man lives but not every man really lives. And I’ve lived 10 lives.”

This year, we will present our first ever ALS Courage Award to Steve McMichael at our annual ALS Walk for Life. Join us on Saturday, September 18 at Soldier Field, home of the Chicago Bears, to celebrate Steve’s courage on and off the field.

Your support is vital to ensuring every person living with ALS in the Chicagoland area can receive the help they need. If you would like to make a donation, please click here.