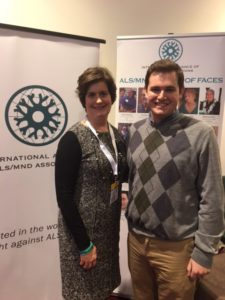 Over 1,100 researchers and clinicians from around the world attended the annual meeting in December in Ireland to learn about trends in ALS care and research. The Foundation’s executive director along with six members from the Les Turner ALS Research and Patient Center at Northwestern Medicine attended, and several presented at, the meeting. All in attendance agreed it’s a very exciting time in the field of ALS research and drug development.

Read a first-hand account written by Jack Rooney, a young man whose father recently died of ALS, who is living in Ireland and was able to attend a portion of the meeting:

The way I see it, there are two different kinds of ALS experts.

My family and I, after two ALS deaths in the past 15 years, are one kind of expert. We know what it feels like when the weight of a terminal diagnosis comes crashing down on your entire existence. We know what it’s like to wake up each morning with a loved one who can do less and less each day. We know how to operate feeding tubes, BiPAP machines, and Hoyer lifts.

Then, when someone dies, like my dad did in June, we know what it feels like to lose one of the biggest parts of ourselves. We learn how to mourn, and how to carry the entire experience of living and dying with ALS with us for the rest of our lives.

I suppose you could say we’re experts in dealing with the disease. We can provide comfort, solace, and solidarity (and enough technical know-how to almost qualify us to be professional caregivers).

Then there are the other experts — the doctors, the researchers, the professors. They provide the hope and the drive; the hope that the cure is out there, within our grasp, and the boundless drive to go and find it.

I’ve had plenty of exposure to the first kind of expert. At this point, my mom, brothers, and an unfortunate amount of my aunts, uncles, cousins, and dear friends are experts in dealing with ALS head on. But until last week, I hadn’t interacted much with the other kinds of experts. I went to one of my dad’s clinic appointments at Northwestern, but after about five hours in the exam room, my brother and I said we wouldn’t be joining my parents for any more.

So, when I went to the Ask the Experts panel at the annual meeting of the International Alliance of ALS/MND Associations in Dublin last Monday, I got some much needed hope, and plenty of inspiration to reignite my contributions to the pursuit of a cure.

Outside of my own lived experience with the disease, I had never done much extensive research on the efforts to find a cure, other than the occasional news story. I had never really heard of any of the drugs in various stages of development that Dr. Shefner described. Nor did I know much about the stem cell injection surgeries already being performed, or how to research and debunk phony treatments with ALS Untangled, which Dr. Glass highly recommended. And despite my family’s apparent genetic predisposition to ALS, I learned more about genetic mapping and the potential for gene therapy in a half-hour listening to Prof. Veldink than I ever had before.

Though their specialties differ, each of the three men projected cautious optimism about the future of ALS treatment. They never strayed from the existing research, and honestly confronted its shortcomings, but nonetheless advanced a narrative of steady progress, waiting for a breakthrough.

“I feel much more optimistic about the spectrum of ways we’re attacking this than I ever have been before,” Dr. Shefner said. He also said the biggest barrier to finding a cure, or at least finding the cause of the disease, is money. The answers to even the most difficult, complex questions about ALS are within our reach, but require more time, more research, and most of all, more money.

I’m not the kind of ALS expert capable of undertaking the research to tackle these tough questions. But I have time and money to give to the pursuit of a cure. Well, as a recent college graduate, I don’t actually have that much money, but I have the time and ability to help raise the money needed to fund the research that could lead to a cure.

Ultimately, finding a cure requires both kinds of ALS experts, and even people who know little or nothing of the disease. And in order to find it, we must continue to come together, fundraise ferociously, research fervently, and find the cure so many people dream of.