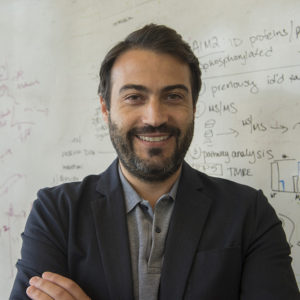 “A DNA mutation in a gene known as C9orf72 is responsible for the largest proportion of familial as well as some sporadic ALS cases,” shares Dr. Kiskinis.

However, what remained unknown was how the faulty DNA within this gene impacted the function of cells that are gradually lost for people living with ALS. One suggestion had been that the mutant C9orf72 blocks or slows down the movement of molecules known as proteins from one site within the cell to another e.g from the nucleus to the cytoplasm.

“In this study, we sought to identify the proteins that are affected and become mislocalized in the cells of patients. We uncovered a number of proteins, which end up in the wrong place and as a result, their function is likely compromised.”

Dr. Kiskinis and his team also identified a specific cellular pathway that is responsible for regulating the transformation of DNA to protein that is “overactive” in ALS patients. “Targeting this pathway pharmacologically could be a rational therapeutic approach for ALS patients. We are currently focused on exploring this pathway further and determining our ability to effectively manipulate it.”

“I am grateful to the Les Turner ALS Foundation that provided crucial financial support for this work and allowed my lab to begin the project. Investing in basic science is a solid path to identifying meaningful therapeutic interventions strategies for ALS and I am thankful to the foundation and the patients that support this vision”