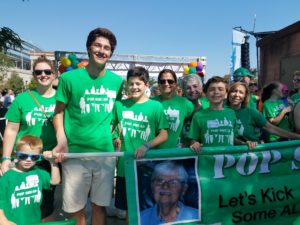 In 2010, Mary Roemer’s life drastically changed. What were supposed to be golden years with her husband, Dave, were uprooted when he was diagnosed with ALS. Trying to come to terms with their “new normal,” Mary found one of our monthly support groups.

The support group introduced Mary and Dave to other families going through a similar situation and to the care, expertise and guidance of the Les Turner ALS Foundation.

Eager to get further involved, the Roemers considered attending the ALS Walk for Life. It had been about a year since Dave’s diagnosis and they weren’t sure it was a good idea. As Mary remembers fondly, they couldn’t have been more wrong. The day was “hopeful and affirming” and has become one of Mary’s most cherished memories.

Though Dave passed away in 2015, the Roemer family’s commitment to supporting the Les Turner ALS Foundation and people living with ALS was just getting started. The family has made it their mission to honor Dave by doing all they can to support the Foundation that took such personal care of him while he was alive.

From trivia nights, wine and cheese parties, to boat cruises and even a cheerleading clinic, the Roemer family has put on countless fundraising events both here and in Boston where some of the family lives. “ALS is often described as an orphan disease. It’s up to the people who are family and friends to support the Foundation,” said Mary.

Mary still attends her local support group and serves on our Support Services Committee as a non-board member. This committee oversees all of the Foundation’s extensive support services for people living with ALS and their families and caregivers and directs the work of  our medical and support professionals to best serve the medical, research and educational needs of those with ALS. Being engaged in so many ways keeps Mary motivated in her desire to raise needed funds for advancements in care and an eventual cure.

Mary’s drive and passion has passed on to the next generation. This year at the 2018 ALS Walk for Life, two of Mary’s grandsons are taking the lead to co-captain their Walk team, Pop Squad.

Just as the Foundation was there for Mary and her family through their journey with ALS, the Roemer family continues to pay it forward and carry on Dave’s legacy. “Once you’re in the Les Turner ALS Foundation family, you’re in it for life.”