Both Men Continually Help Raise Funds and Awareness, Advocate for Change While on their Own ALS Journey 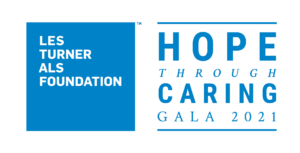 Through Caring Award, and Steve Gleason will receive the Harvey and Bonny Gaffen Advancements in ALS Award at the virtual event. Guests will enjoy entertainment, an online auction, virtual paddle raise and optional dinner package, and Paul Lisnek of WGN-TV will be returning as the event emcee.

As an engineer and business owner, Bob has never backed down from a challenge. His tenacity was formed as a young lieutenant in the Army during the building of the Berlin Wall and the Cuban Missile Crisis.

Bob’s perseverance was tested in 2010, when he noticed his coordination and strength on the left side of his body were diminished. At 70 years old, he rationalized these were signs of the aging process; however, over the next year he experienced several falls and became concerned there may be a more serious problem. Bob’s primary care physician suggested he might have a neurological issue and referred him to a specialist. After years of seeing physicians at several institutions, in September of 2014, Bob received a definitive diagnosis of ALS at the Les Turner ALS Center at Northwestern.

“I’ve always been a ‘glass half full’ guy, so maintaining a positive state of mind throughout this journey has been easier for me than it may be for others,” said Bob. “Now that I’m retired, I stay engaged with family, friends and my faith, all of which keep my days full.”

Bob has always been committed to giving back, serving as school board president, chair of the plan commission and president of a 30,000-member, global technical society. Bob has also supported the Ara Parseghian Medical Research Foundation and Cystic Fibrosis Foundation.

Today, Bob and his wife Mary, who live in Lake Forest, participate in the Les Turner ALS Foundation’s Chicago support group and are dedicated donors to the Foundation’s Research and Support Services program. While Bob’s health has declined slowly, he is still ambulatory with a walker and his speech, although weakening, is understandable.

Support group leader, Ileane Mindel, RN, will present Bob with the Hope Through Caring Award, which honors those whose commitment to the fight against ALS has helped raise funds for research, provide services for patients and families and increase public awareness. 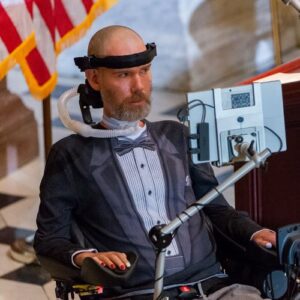 In addition to presenting the Hope Through Caring Award at the gala, the Foundation will recognize Steve Gleason with the Harvey and Bonny Gaffen Advancements in ALS Award, which recognizes either an individual significant advancement in ALS research and clinical care or a body of work dedicated to furthering ALS research, treatment or care.

As a former NFL player with the New Orleans Saints, co-founder of the Team Gleason and Answer ALS organizations and Congressional Gold Medal recipient, Steve has become a remarkable advocate and fundraiser for the ALS community. Since his ALS diagnosis in January 2011, Steve has provided more than $10 million in adventure, technology, equipment and care services to thousands of people living with ALS.

A core element within the Team Gleason mission is to provide advanced technology for people with ALS, empowering them to continue living purposefully and productively. To achieve this goal, Team Gleason provides voice banking for people living with ALS through a partnership with Model Talker.

Furthermore, as an advocate on the national stage, Steve helped get the Steve Gleason Act passed by Congress, ensuring availability of life sustaining communication devices for people with degenerative diseases.

“We are pleased to recognize and celebrate both Bob and Steve for their meaningful contributions to the ALS community,” said Andrea Pauls Backman, CEO of the Les Turner ALS Foundation. “Through the ways in which they choose to live with ALS, they are inspiring other patients and families to live fully and to hold on to hope.”

For more information about the program, ticket packages and sponsorships, visit hopethroughcaring.org.

ABOUT THE LES TURNER ALS FOUNDATION

Founded in 1977, the Les Turner ALS Foundation is the leader in comprehensive ALS care in Chicagoland. Our individualized approach ensures each person living with the disease receives the best quality of care, and our local community of support provides their loved ones with answers and encouragement. Our Les Turner ALS Center at Northwestern Medicine is led by the most well-respected and successful clinicians and researchers in the field, advancing vital care and research in pursuit of life-enhancing treatments and a cure.

Amyotrophic lateral sclerosis (ALS) is a terminal progressive disease that causes muscle weakness, difficulty speaking and swallowing and, generally, complete paralysis. While some symptoms are treatable, there is no known prevention or cure for ALS.

To learn more about the Les Turner ALS Foundation, call 847-679-3311 or visit www.lesturnerals.org.