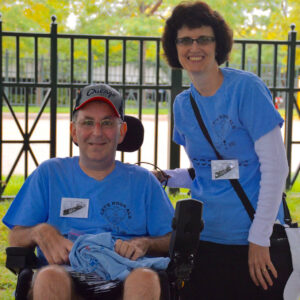 The first night they met, John and Meg Rooney won second place in a dance contest. What followed was a 27-year marriage, three sons and a long-term dedication to our Les Turner ALS family.

For many of you, the Rooney family and their journey with ALS is one you know well. You’ve seen John, who was diagnosed with ALS in 2014, participate in our “Freeze ALS” campaign. You’ve heard the family share their story in one of our Hope Through Caring videos. You’ve seen the “Let’s Roon ALS” t-shirts at our ALS Walk for Life and scattered across the South Side during our May Tag Days drives. The Rooney family has been a part of our Les Turner ALS family for over 20 years, starting when John’s mother first battled the disease in the 1990s. The family turned to the Foundation again after John’s diagnosis.

“She would probably be the first person to tell you that before our dad got sick, she would have never considered herself a strong person,” shares Jack, Meg and John’s second-oldest son. “But through his illness, through his journey, she found that strength that was inside of her all along.” 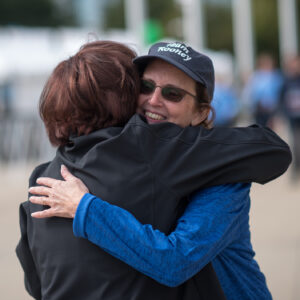 Meg’s kindness and tenacity extended beyond her family and into her career. As counselor and case manager at Kellogg Elementary School, Meg oversaw the school’s positive behavior intervention program. And after John’s battle with the disease ended in 2016, Meg joined our Board of Directors.

“We were honored to have Meg as a vital part of the Foundation for many years and a member of our board the last two years,” shares Foundation CEO, Andrea Pauls Backman. “Meg was always generous with her time, her compassion, her wisdom.”

Last month, Meg lost a short battle with cancer. While we again say goodbye to a member of our Les Turner ALS family gone too soon, the Rooney name has left a lasting impression on our commitment to creating a world free of ALS. Or, said another way, to “roon” ALS.