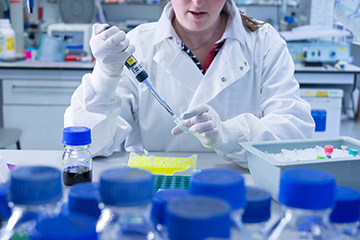 One of the questions that people living with ALS often ask is – what can I do to help ALS Research? ALS patients can do that, with a personal contribution to the National ALS Registry (Registry) – in the newly launched National ALS Biorepository (Biorepository).

The Agency for Toxic Substances and Disease Registry (ATSDR) launched the National ALS Biorepository as a part of the Registry in January 2017. This launch came after a pilot study that showed it was feasible to include a biorepository. The Biorepository is collecting biological samples from persons with ALS. It’s different from other biorepositories because it does not limit who can take part to a specific area, study, or clinic. This means that participants’ samples may help researchers everywhere work toward better understanding the causes of, and possible treatments for ALS.

While giving biological samples may sound complicated, it is not. The Biorepository makes taking part easy, and it’s free to participants. The biological samples will be collected in the patient’s home. Samples collected could include blood, saliva, and urine. These samples will be stored and available for research. It is also possible for a person with ALS to sign up to give tissue to the Biorepository after his/her death.

How will these samples be used? Samples will be used for research about ALS. Samples can be linked with the participant’s Registry risk factor survey data. Connecting biological samples with risk factor survey data will make the Registry more complete and useful. Researchers approved by ATSDR will be able to request samples from the Biorepository. This Biorepository may help scientists better understand the cause(s) of ALS. For example, researchers may be able to study the genetic variation in those with ALS. Analysis of these types of specimens has already proven useful in discovering important genes related to ALS and other motor neuron diseases.

While we do not yet know what causes ALS, the Biorepository is an opportunity for people with ALS to contribute to ALS research. This research could help us learn more about the causes of ALS. The Registry and Biorepository contribute to a better understanding of ALS. Learning more about people who have ALS is critical in the battle to defeat it. Help researchers battle this disease today, by visiting wwwn.cdc.gov/ALS/ALSNationalBiorepository.aspx and learning more.