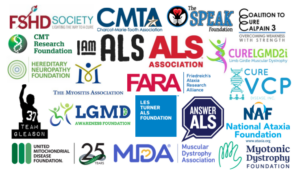 On July 13, 2021 the Les Turner ALS Foundation and 19 other advocacy organizations sent a letter to call on the House of Representatives to pass the ACT for ALS Act (H.R.3537) as soon as possible, and no later than the end of this year. We are grateful for the solidarity of the neuromuscular community.

The ACT for ALS would create the “HHS Public-Private Partnership for Rare Neurodegenerative Diseases” with the intention of convening drug development stakeholders in rare neurodegenerative diseases to better coordinate efforts.

This legislation also commissions an action plan from the Food and Drug Administration (FDA) on the ways in which the Agency will advance therapeutic development, regulatory science, and policy dissemination all to accelerate drug development in rare neurodegenerative diseases.

Finally, the ACT for ALS would create two new grants program both with the goal of accelerating development and access to promising new therapies. The “FDA Rare Neurodegenerative Disease Grant Program” would contribute tens of millions of dollars per year to innovative therapeutic development ongoing within rare neurodegenerative diseases, funding that is often lacking due to the small size of rare neuromuscular disease populations. The legislation would also create a grants program to fund expanded access programs from small biopharmaceutical companies developing therapies for ALS.

View the full details of the ACT for ALS, here.