When Marshall Krolick passed away in February, the Les Turner ALS Foundation lost one of its longest-standing family members and biggest supporters. As a close friend of Les Turner, for whom the Foundation is named, Marshall was at the hospital when Les was diagnosed with ALS in 1976 and was intimately involved in the Foundation’s birth a year later. 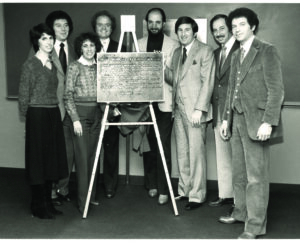 Marshall would go on to become a member of the Foundation’s original Board of Directors (pictured fourth from right), where he would serve for more than 30 years in a variety of roles, including Executive Vice President. As a practicing attorney, he was instrumental in providing the Foundation with pro bono legal services and played a major part in setting up the partnership with the then Northwestern University Medical School to establish the nation’s first ALS research laboratory in 1979, and in 1986 the establishment of our Lois Insolia ALS Clinic.

As Les Turner’s brother-in-law and best friend, Harvey Gaffen was also one of the Foundation’s founding members and still serves both on the Executive Board and Board of Directors today as Chair Emeritus. He remembered meeting Marshall for the first time in 1957 at a club meeting of their girlfriends, who later became their wives. 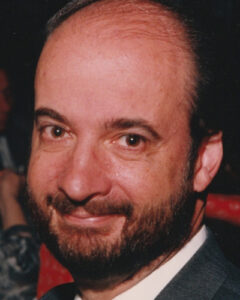 “I remember thinking who is this guy in the pointed cowboy boots,” said Harvey, with a laugh. “He was quite a character.”

This forged a friendship that would last for more than 60 years. Harvey recalled riding together from Evanston Hospital that fateful evening when Les Turner was diagnosed with ALS.

“We pulled over to the side of the road and cried,” said Harvey. “It was tremendously emotional for both of us.”

Marshall would later go on to experience the many emotions of ALS in his own extended family.

Outside of their volunteer service for the Les Turner ALS Foundation, Marshall and Harvey spent many hours together carpooling back and forth to their jobs in the Chicago Loop from the Northbrook and Glenview area nearly every day for 35 years. Their conversations spanned everything from the Cubs and Bears to John Wayne (who was Marshall’s idol) to softball games and the Civil War, a topic in which Marshall was a nationally-renown scholar and historian. One thing they did not share was Marshall’s love for country and western and bluegrass music.

But what Harvey remembers most fondly was Marshall’s personality and desire to help others.

“He was a most caring and generous person,” said Harvey. “He gave his time not only to the Les Turner ALS Foundation, but to many other worthwhile causes.”

Through his volunteerism and community involvement, Marshall served as President of Congregation B’nai Jehoshua Beth Elohim, President of Ravinia Green Country Club, founding Board Member of HAAPE and Board member of Temple Dor Dorim, just to name a few. He also supported many historical organizations, including several Civil War Round Tables, the Gettysburg Foundation, the Chicago Historical Society, American Jewish Archives and Chicago Jewish Historical Society.

The Les Turner ALS Foundation will be forever grateful to Marshall and his family for their generosity and commitment to creating a world free of ALS.