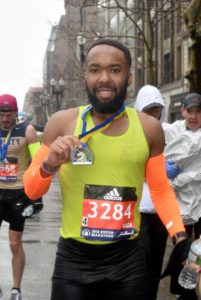 In 2015, Julian Davis was a student at Saint Xavier University when he received the devastating news that his father, Samuel, had been diagnosed with ALS.

Immediately, Julian began searching for a way to honor his father. As a student-athlete on the University’s cross country team, running seemed like a perfect fit.

That’s when Julian found Team Race for ALS, a program we offer that allows anyone to participate in any endurance event anywhere they want while raising money and awareness for the Foundation.

Team Race for ALS tied Julian’s skills and his desire to take action for people living with ALS together in one perfect program.

Though Julian had only run the shorter 5k distance before, he set his goal high and, in 2016, successfully finished the Chicago Marathon, raising $1,300 along the way to help people living with ALS.

“Running is a way for me to show my dad and others they are not alone in this fight,” said Julian. “Every mile I run is dedicated to all who battle this disease. Through Team Race for ALS, I’m able to use running to make a difference in the ALS community by fundraising for the cause.”

Julian’s success in the Chicago Marathon qualified him for the world-renowned Boston Marathon and this past Monday, April 16, Julian completed his second marathon in support of the Foundation and people living with ALS, his father’s battle inspiring him every step of the way.

For this race, Julian has raised close to $1,700. While Samuel couldn’t make it to Boston to watch him compete, Julian looks forward to sharing memories of his experience with his father, knowing every moment together is precious.

If you are interested in joining Team Race for ALS or fundraising for the Foundation your own way, visit our website to learn more.