It’s estimated that less than 1% of the world’s population will run a marathon in their lifetime. That’s what makes finishing a marathon even more impressive for the 29 members of our Team Race for ALS who ran the Bank of America Chicago Marathon last Sunday. 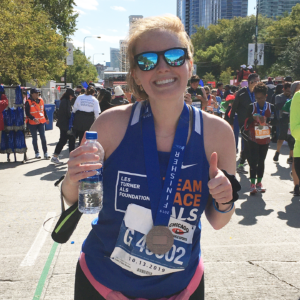 “It’s a lot of physical work, but it is 99% mental,” shares Megan Flanagan. “But running for a cause you believe in makes the race that much more special! I chose to run for the Les Turner ALS Foundation because I see the positive impact they bring to help people living with ALS and their family members.”

These incredible marathoners run for those who can’t, plain and simple. And many of them know first-hand just how true that statement is. For Megan, it’s from her work as an occupational therapist at the Shirley Ryan Ability Lab.

For Ninfa Queyquep, it’s her journey with ALS after her husband Eric was diagnosed in 2009. 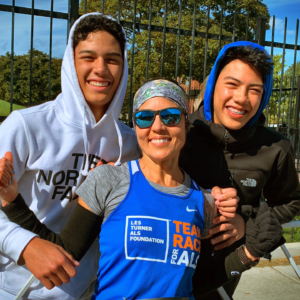 “I personally have seen the challenges someone living with ALS goes through,” says Ninfa. “If I’m physically struggling in a run or workout, I think of how minimal that is compared to the daily struggles of a person living with ALS. That motivates me to run for a purpose.”

As if running 26.2 miles wasn’t enough, our runners also set a new Team Race for ALS fundraising record, raising over $53,000 to support our Les Turner ALS family! “Every mile and every dollar is helping those battling ALS striving to move forward through their daily lives,” shares Ninfa.

“It truly makes those living with ALS feel that they are not alone. We are fighting for them. It makes you proud to wear the Team Race for ALS shirt at the Marathon. You are running with your heart from mile 0.0.”