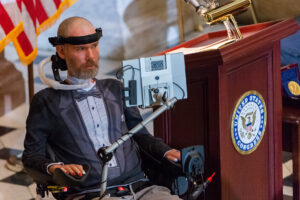 Last week, Steve Gleason, former NFL player and person living with ALS, was awarded the Congressional Gold Medal, our nation’s highest civilian honor bestowed by Congress. The medal seeks to honor those, “who have performed an achievement that has an impact on American history and culture that is likely to be recognized as a major achievement in the recipient’s field long after the achievement.”

The first medal was awarded in 1776 and, since then, only 163 institutions, people or events have been bestowed this great honor. Steve is the first NFL player and the first person living with ALS to receive the medal. And for those of us in the ALS community, it comes as no surprise.

Since his diagnosis in 2011, Steve has emerged as a key leader in the fight against ALS, advocating for the rights and needs of people living with the disease. And, because of his career in the NFL, has been able to draw national attention and awareness to the disease.

As Steve shared while he accepted his medal, “This award, from the elected officials who represent the people of the United States of America, is a sublime honor for me. But, I feel that, more importantly, I feel that this honor represents some joy, encouragement, and even triumph, for the tens of thousands of extraordinary families currently enduring life with ALS, the millions of extraordinary people in this country living with disabilities or other illness, and more broadly, all of you ordinary humans, who experience adversity, tragedy, or anguish.” 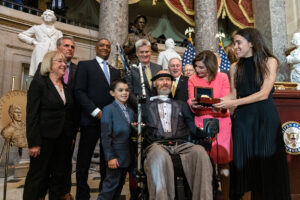 His nonprofit organization, Team Gleason, has provided nearly $10 million in adventure, technology, equipment and care services to over 15,000 people living with ALS. In 2015, both the U.S. House of Representatives and the Senate unanimously passed The Steve Gleason Act to ensure the availability of life-sustaining communication devices. And in 2018, the Steve Gleason Enduring Voices Act was signed into law.

His impact on the lives of people living with ALS is unmatched. He is a hero through and through. And we know that like all of the medal recipients, the legacy of Steve Gleason will remain for centuries to come.