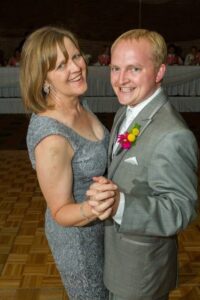 I lost my 30-year-old son to ALS in July of 2017. Kris was 27 and newly married when he was diagnosed. He died just three years later. During those three years, Kris, an elementary school special ed teacher, became very involved with ALS fundraising and advocacy. He channeled his fury at ALS into defiance and hope for a future where others with ALS would not have to endure what he endured.

A year into his ALS journey Kris started a blog, “Gronks Finding Grace.” A typical post began with a rant about life with ALS but then turned toward gratitude and seeing God at work in people around him. Friends and strangers read his blog and were inspired.

I asked him once, do you get tired of that, of being inspiring? Of allowing readers to get past the hard stuff quickly and jump ahead to a positive ending? He said, what else can you do, Mom? You have to live with hope, you have to trust in God’s grace. Because the alternative is just no way to live.

As we walked and donated and advocated in those years, I couldn’t help but ask myself, how will I feel someday when they finally find a cure 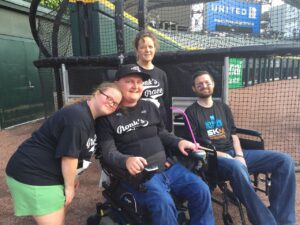 Several weeks ago I opened an email from the Les Turner ALS Foundation and clicked on a link and filled out a form indicating my interest in attending the NEALS ALS Clinical Research Learning Institute (CRLI) and becoming an ALS Research Ambassador. I was not sure what I was getting myself into, beyond a weekend spent in front of a Zoom screen, but, in these days of being stuck at home during COVID, I am looking for ways to be faithful to my son’s example, to his love and faith and energy.

So there I was last Saturday and Sunday (Feb. 20 and 21), listening to doctors and patients and family members discuss what was new in ALS research — new therapies under study and new ways to study them. Scientific terms and acronyms flew around the Zoom rooms. Great questions were posed in the chat. Bits of hope floated up here and there even as experts acknowledged that we still aren’t sure what kicks off the death of motor neuron cells in ALS. 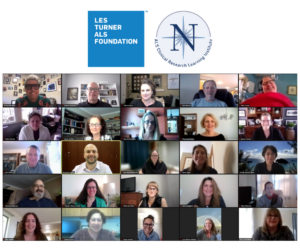 The faces were new, but the community was familiar. At the beginning of the program Dr. Rick Bedlack, director of the Duke University ALS Clinic, and the moderator, went around the Zoom screen, inviting each participant to say why they were here. There were people who had lost spouses to ALS and others who’d lost siblings. There were people who have ALS and people who come from families with familial ALS. Some had backgrounds in science or engineering, some not so much. As the program continued, I was grateful for Dr. Bedlack’s ability to jump in with quick definitions and explanations that helped pull together pieces of the ALS research puzzle.

Dr. Senda Ajroud-Driss, director of the Lois Insolia ALS Clinic at the Les Turner ALS Center  reported on clinical trials available at Northwestern Medicine and also on what’s in the pipeline more generally for ALS research. She said that while 2020 was a horrible year in so many ways, it was a great year for ALS research. And not just for studies and results, but also because COVID forced researchers to find ways to make it easier for patients to participate with fewer trips to a clinic. She described the HEALEY ALS Platform Trial which has streamlined study design and maximized research dollars, while randomizing a greater proportion of participants into groups receiving treatment.

A couple weeks later I continue to think about what I will do with what I learned. I’ll write better letters when it’s time to do some advocacy with my representatives in Congress. I’ll be a better, more positive citizen on social media when ALS topics show up in my Twitter feed. I’ll continue to support ALS research with my charitable donations. And I have a few other ideas based on my family’s personal experience with ALS. I’ll try to stay involved by attending monthly online meetings of the Patient Education & Advocacy (PEACe) Committee. I’ll do my bit, however modest.

They say that the death of a child is the hardest loss to endure, and I would not argue with that. I miss Kris so much. But with the grief I carry the memory of his spirit and his determination to live with love and hope.

I must do that, too. Because, what’s the alternative?

Gwen Gotsch is the mother of the late Kris Grahnke and his two siblings, Eliza and Kurt, and friend to Michelle Grahnke, Kris’s widow. She is a writer and musician, works at her church, and blogs occasionally at The Perverse Lutheran.

To learn more about the NEALS ALS Clinical Research Learning Institute, click here. To hear what it is like to become a Research Ambassador, watch this short video from Dr. Rick Bedlack.