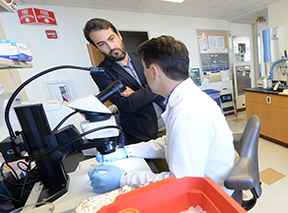 We are thrilled to share that Dr. Evangelos Kiskinis, one of the lead researchers at the Les Turner ALS Center at Northwestern Medicine, has been published in the journal Stem Cell Reports.

From Dr. Kiskinis: “In our most recent manuscript, which was published in the journal Stem Cell Reports, we used a new and rather exciting method to measure the electrical patterns of motor neurons derived from ALS patients and controls. The method was originally developed by Adam Cohen’s group (Prof of Physics and Chemistry, Harvard University). It relies on the combinatorial expression of two proteins: a channel rhodopsin, which when stimulated with blue light leads to an action potential or electrical current in a cell, and an Arch rhodopsin, which when stimulated with red light, emits far-red light that directly corresponds to voltage changes. These proteins allow us to literally see electricity in a cell and measure hundreds of neurons in one experiment. In the past, we relied on single cell manual patch physiology to get this information, which required a significant amount of time and labor.

In this study we made spinal cord motor neurons (the cells that degenerate in ALS) from patients with SOD1 mutations and isogenic controls (corrected by CRISPR) and measured electrical patterns from thousands of cells. We discovered that ALS neurons are hyper-excitable (i.e over-active) under basal conditions but become hypo-excitable (under-active) when we challenge them to fire continuously and rapidly. We also uncovered that there are two distinct subtypes of patient’s neurons, those that exhibit these deficits and those that appear normal.

These findings are important for a number of reasons. Firstly they harmonize our understanding of excitability in human ALS motor neurons with previous studies that we and others have conducted. Specifically, we have previously reported that ALS SOD1 motor neurons are hyper-excitable at an early stage, while Devlin and coworkers studied stem cell derived motor neuron models of ALS with TDP43 and C9ORF72 mutations. They observed a transition from hyper-to hypo-excitability in the mutant cells as a function of time in culture, concomitant with our findings of a similar transition as a function of stimulus intensity.

These observations also highlight the importance of analyzing neuronal recordings at the single-cell level, rather than simply looking at aggregate population-level statistics. We are intrigued to find what makes some of our cells vulnerable while other resistant to this phenotype.

The stem cell-derived motor neurons studied here represent an immature developmental state, while ALS typically strikes in adulthood. Whereas the disease-causing mutation is present throughout the life of the patient, its effect is clearly age dependent. The excitability changes observed in these patient neurons most likely represent the early steps in the disease process. The fact that these changes are detectable in stem cell derived neurons, offers the hope that interventions that affect excitability could affect disease progression before symptoms begin. We now have a platform to study this process in more detail and identify such therapeutic interventions.

This was work that was performed in collaboration with the labs of Kevin Eggan and Adam Cohen at Harvard University. We are incredibly grateful to the Les Turner ALS Center at Northwestern Medicine for the generous support, as this work would not be possible without it.”