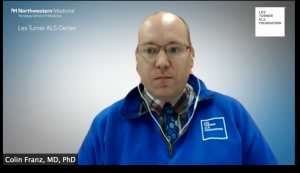 Northwestern scientists and clinicians demonstrated their continued commitment to advancing knowledge and therapies for amyotrophic lateral sclerosis (ALS) during the 11th annual Les Turner Symposium on ALS. The virtual, daylong symposium featured scientific presentations highlighting the molecular mechanisms of ALS pathogenesis, novel therapeutic approaches and a Q&A panel for individuals with ALS, their families and caretakers.

The symposium, held on November 1, was sponsored by the Les Turner ALS Center at Northwestern Medicine, which brings together ALS research, clinical expertise and educational opportunities. The Les Turner ALS Foundation established the center.

“We ensure that each person living with the disease receives the best quality care and access to promising therapies. As the longest-serving independent ALS group in the country, our approach has not changed,” said Andrea Pauls Backman, MBA, chief executive officer of the Les Turner ALS Foundation.

Robert H. Brown, Jr., D.Phil., MD, the Leo P. and Theresa M. LaChance Chair in Medical Research and director of the Program in Neurotherapeutics at the University of Massachusetts Medical School, delivered the keynote address. Brown emphasized a new direction for ALS therapies, including novel druggable molecular pathways supported by the discovery of more than 50 ALS-associated genes over the last three decades.

“I’m always optimistic, but I’m particularly optimistic now that some combination of the new biological therapies and the small-molecule therapies are eventually going to substantially slow this disease, and that the day will come when ALS behaves more like post-polio syndrome and becomes a chronic non-lethal disease,” Brown said.

Other scientists from Northwestern and the National Institutes of Health (NIH) discussed their recent findings and ongoing efforts investigating the molecular mechanisms of ALS pathogenesis and novel therapeutic approaches. Colin Franz, MD, PhD ’13, ’17 GME, assistant professor of Neurology and of Physical Medicine and Rehabilitation, underlined the clinical importance of lower motor neuron degeneration after a spinal cord injury and its implications for patient prognosis and surgical rehabilitation which can be applied to ALS research and care.

“Trauma is definitely not a genetic disease in the sense that the gene causes spinal cord injury, but these genetics can influence outcomes,” Franz said. “I think we can learn from ALS and vice versa in terms of how motor neuron health is important for both diseases.” 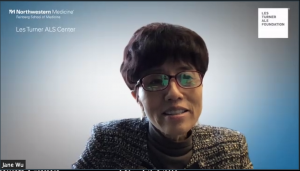 Jane Wu, MD, PhD, the Dr. Charles L. Mix Research Professor of Neurology and Psychiatry, discusses her work in identifying the prevalence of mitochondrial dysfunction in frontotemporal dementia and ALS.

Jane Wu, MD, PhD, the Dr. Charles L. Mix Research Professor of Neurology and Psychiatry, discussed her work regarding the prevalence of mitochondrial dysfunction in frontotemporal dementia (FTD) and ALS. Many individuals diagnosed with ALS demonstrate behavioral changes or a decline in language skills similar to those observed in people with FTD. This association was further supported by previous work showing that 90 percent of ALS cell samples and 50 percent of FTD cell samples showed TDP-43 gene pathology.

“We would like to propose that balanced nuclear mitochondrial communication is crucial for cell health and for mitochondrial health,” Wu said. “Genetic manipulations that ameliorate mitochondrial defects rescue neurogenerative phenotypes, suggesting that mitochondrial dysfunction is critical for pathogenesis.”

Following Wu’s presentation was Michael E. Ward, MD, PhD, a principal investigator at the National Institute of Neurological Disorders and Stroke and co-director for the NIH’s iPCS Neurodegenerative Research Initiative (iNDI). The goal of iNDI is to improve the understanding of how genetic mutations, including expression of a cryptic exon in the gene UNC13A, can lead to the brain cell damage underlying Alzheimer’s disease and other neurodegenerative diseases.

“Targeting this cryptic exon may be a promising new therapeutic strategy for ALS, potentially improving symptoms in patients with ALS by improving synaptic function despite TDP-43 loss,” Ward said.

Another emerging area of interest is inhibiting protein aggregation in ALS gene mutations as a potential treatment strategy for neurodegenerative disorders. Richard Silverman, PhD, professor of Pharmacology and the Patrick G. Ryan/Aon Professor in the Department of Chemistry at Weinberg, spoke about the development of the compound NU-9 as a potential therapeutic approach for upper motor neuron diseases.

The final session of the symposium featured a Q&A panel, where this year’s presenters answered questions from the more than 400 attendees live-streaming the event. Senda Ajroud-Driss, MD, associate professor in the Department of Neurology’s Division of Neuromuscular Disease and director of the Lois Insolia ALS Clinic at the Les Turner ALS Center, discussed the importance of expanded access, or “compassionate use,” which gives patients with immediately life-threatening conditions or diseases access to non-FDA approved drugs or medical devices when no other alternative treatment options are available.

“We would like to see the day where every single ALS patient will be eligible for one kind of therapy, whatever it is, but it has to be done the right way,” Driss said.

Lisa Wolfe, MD, ’95 GME, professor of Medicine in the Division of Pulmonary and Critical Care and of Neurology, added that as treatment development moves more towards personalized genetic therapies, pharmaceutical companies must plan for expanded access early on so it becomes standard practice and eventually part of a larger clinical trial program.

“When the trial contracts are being signed, the obligation of the company for expanded access and extended access has to be signed in the beginning because those costs should not be thought about after. They should be thought about before and we need to be the advocates to do it up front,” Wolfe said.

“The decision-making tool is a way to have people with ALS and their caregivers think through what their values are and what kinds of questions they want to ask their physicians,” Webb said.