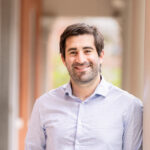 At this year’s Hope Through Caring Gala on May 21, we are proud to present the Harvey and Bonny Gaffen Advancements in ALS Award to two innovators and longtime advocates of ALS – Joshua Cohen and Justin Klee, co-founders of Amylyx Pharmaceuticals, Inc., formed in 2013. Amylyx’s therapeutic compound for ALS, AMX0035, is currently under priority review with the FDA.

Josh and Justin are true pioneers in ALS therapeutic development and passionate about their work with ALS and neurodegenerative diseases, which started when they were students at Brown University.

Josh explains, “When I was an undergraduate at Brown, I became fascinated with the idea of neurodegeneration and why there was limited evidence behind its root cause. Out of my own curiosity, I read countless papers which all led to one question: ‘Why do neurons die?’” It was around this question that Amylyx was founded.

Although they did not initially have a direct connection to ALS, Josh and Justin naturally developed personal connections with those living with ALS as the company was forming. Says Justin, “When we first started the development of AMX0035, our investigational product for the treatment of ALS, it quickly became personal as we met and formed close relationships with so many wonderful people in the ALS community.”

Josh shares a memorable story about an early advisor and friend who taught them the importance of listening: “Stephen was living with ALS when he helped us design the CENTAUR trial, and we became friends. Stephen went to Milton Academy (same school as me). When we first met, his symptoms were not obvious, as he was still in the early stages of ALS. One of the things Stephen taught us was the importance of people feeling heard—we may not always have all of the answers for the community or for ALS but listening to the community and the people we serve is what makes us better. We incorporated this advice as we worked with him to design CENTAUR. We remained close with Stephen until he passed in 2018. His passing was a complete shock to us because he had seemed so vibrant when we last we spoke with him. It is easy to think of ALS as a disease which happens to ‘somebody else’ and could never affect us, but ALS can affect anyone at any time. Knowing Stephen makes us realize how valuable every day is and how valuable health is—we continue to fight every day to help fight this disease.”

Both Justin and Josh have a positive outlook toward the future. Says Josh: “We are optimistic about the advancements in ALS research, how much the field has grown, and all the new work being done to advance treatment and care. We are thrilled to see all of the new drugs entering clinical trials, and hope to quickly bring multiple additional shots on goal until this disease is cured.” He adds, “We are also absolutely thrilled that AMX0035 has shown effects on slowing clinical decline and on overall survival for people with ALS. We believe AMX0035 has the potential to make the disease slower moving for people with ALS. However, we are motivated to one day see this disease cured and hope that between us and the increasing efforts by the community, we will make this happen.”

“We’re incredibly grateful for individuals living with ALS who participate in our clinical trials and dedicate their time to connect with us and share feedback; the caregivers and families who provide immeasurable support to their loved ones with ALS; advocates and clinicians who contribute to a shared mission to give people with ALS more moments – the collective support and involvement from everyone within the community motivates us to keep pushing to find solutions,” says Justin. Josh adds, “Every day we are amazed by the knowledge, passion, and proactivity the community continues to show, and we understand our responsibility to deliver on our promises. Time is limited and precious for those living with ALS and their loved ones. We are continuing to deliver on those promises.”

In looking towards the future, both Justin and Josh are optimistic. Justin says, “Josh and I often talk about how we feel like we’re in the midst of a revolution in ALS – the same way as we had not all that long ago in many forms of cancer, multiple sclerosis, and many other diseases. People thought those diseases were impossible to figure out too – until they weren’t. And it was those first, broad-acting treatments that changed the trajectory of disease, that enabled people to live longer, and allowed the fields to become more and more precise in treatments of different forms of the disease. We feel like we’re right on the cusp of that moment in ALS too.”

We are proud of the achievements that Justin and Josh made and look forward to important next steps. Join us at the Hope Through Caring Gala on May 21 to honor their accomplishments in the ALS space and to celebrate with our friends in the ALS community.