The 34th Annual Hope Through Caring Gala: Reunited and it feels so good!

Through your generous donations, we raised nearly $550,000 to support research, clinical trials, and, most of all, personalized care for people living with ALS. We can’t thank you enough. 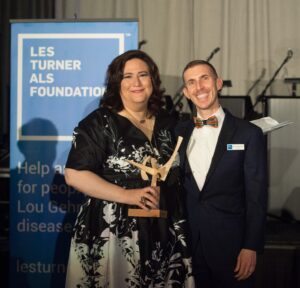 This year we honored Dr. Lisa Wolfe with the Hope Through Caring Award, presented by Dr. John Coleman III, her friend and colleague at Northwestern Medicine. The Harvey and Bonny Gaffen Advancements in ALS Award went to Amylyx Pharmaceuticals’ Joshua Cohen and Justin Klee. Their award was presented by Rosie Riley, a person living with ALS and friend of the Foundation. Another highlight of the evening was Board Chair Ken Hoffman officially handing over the torch to incoming Chair Erin Reardon Cohn. Although Ken will be stepping down from his role as Chair this month, he will remain on the Board. 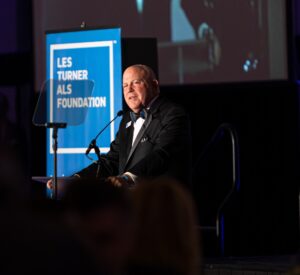 Photos of the celebration, videos of the awards and complete program, and much more are available on our website. Donations are also still being accepted at HopeThroughCaring.org. Thank you again for your ongoing support and your belief in the Foundation. 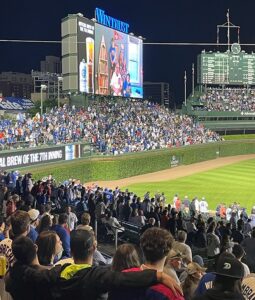 On a breezy, clear evening at Wrigley Field, we were thrilled to join friends in the ALS community to celebrate Lou Gehrig Day and watch the Chicago Cubs square off against the Cardinals. 30 people enjoyed the game from the Les Turner ALS Foundation seats and suite.

One of the highlights of the evening included two people living with ALS, former NFL player and Founder of Team Gleason Foundation Steve Gleason and I AM ALS co-Founder Brian Wallach, who threw out the ceremonial first pitches. The Seventh Inning Stretch showcased the talent in the ALS community as people living with ALS and their families sang “Take Me Out to the Ballgame,” which was aired on the big screen.

The evening came to a close on several high notes, including a Cubs win! As we exited the field, we were grateful to have spent the time together with our Foundation family and the ALS community to not only honor the legacy of Lou Gehrig, but to have created more ALS awareness. A big thank you goes out to the Major League Baseball (MLB) and the Chicago Cubs organization for being such a gracious host.

Honoring the dads in our lives

“Any man can be a father, but it takes someone special to be a dad.” – Anne Geddes

Father’s Day is a day when many families celebrate by going out to lunch, playing a few rounds of golf, or just hanging out. It’s a day when we thank our fathers and father figures who taught us how to ride a bike, wiped away our tears, and went to the grocery store in the middle of the night when we were sick with the flu. In honor of Father’s Day, we honor those in the ALS community who are not just fathers but true dads. 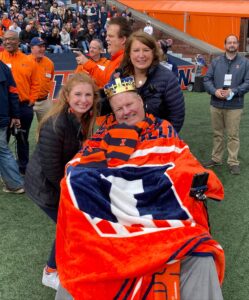 Karen Toole, wife of Matthew Toole, recalls memories of past Father’s Days saying, “Prior to Matt’s passing, we celebrated my son Paddy’s birthday and Father’s Day together.” She adds, “2020 was extra special for us. My daughter Regan nominated Matt to be “King Dad” at the University of Illinois Urbana-Champaign (UIUC) that year. To be eligible to be a “King Dad,” an individual must clearly demonstrate a commitment to their role as a father and are a role model of honesty and patience. Matt was chosen for the honor, and we couldn’t have been more thrilled!”

The Toole family will  continue to keep Matt’s legacy alive. As Paddy says, “My dad is no longer physically with us, but I know his legacy will live on in myself, my mom, and Regan. He will continue to impact us, and I will never forget the lessons he taught me to be strong and be the best person I can be.”

In honor of dads like Matt and other father figures in the ALS community, let’s celebrate the dads in our lives and those who have passed by continuing the ALS fight and making a donation so we can help other families spend more precious time with their dads.

As connecting fibers between motor neurons, axons help deliver vital messages between the brain and the spinal cord. For people living with ALS, deteriorating axons cause that connection to break, contributing to paralysis and death.

Pre-clinical research on NU-9, an experimental drug invented and developed by members of the Les Turner ALS Center at Northwestern Medicine, has shown the ability to lengthen the axons of diseased upper motor neurons in an SOD1 ALS mouse model. NU-9 also showed an enhanced effect in mice when given in combination with the FDA-approved drugs riluzole and edaravone.

NU-9 was invented by Richard B. Silverman, PhD, the Patrick G. Ryan/Aon Professor at Northwestern University, and animal studies were carried out by P. Hande Ozdinler, PhD, associate professor of neurology at Northwestern’s Feinberg School of Medicine. The Les Turner ALS Center at Northwestern Medicine funded the early study on this compound. 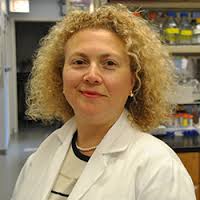 “For a drug to be effective, it is important for that drug to improve axon outgrowth and axon health,” said Dr. Ozdinler, the co-lead author of the study. “This is very important for connecting the brain and the spinal cord and for revitalizing the motor neuron circuitry that degenerates in patients.”

Read more about NU-9 and the next steps being taken toward clinical trials in our blog.